Glasgow beat reigning champions Connacht in Galway to get their new season off to the best possible start. 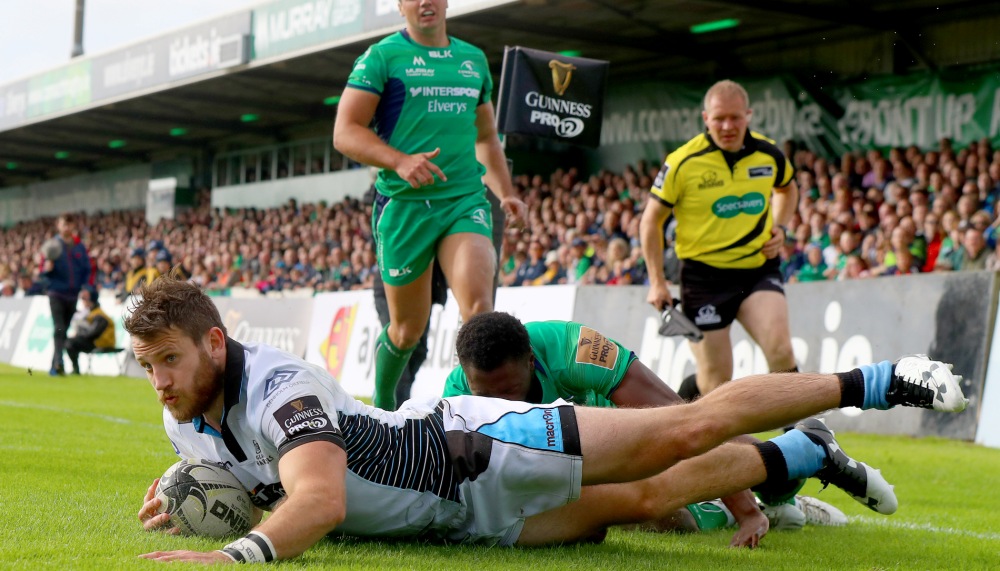 It was Warriors’ third consecutive competitive game at the Sportsground and they came out on top 41-5, scoring six tries to one.

It didn’t take long for the match to find it’s tempo and it felt like competitive rugby had never been away as both sides showed exciting attacking intent from the off.

The Champions attacked from deep, keeping the ball in hand and using width to cause the Warriors early problems.

However, Glasgow had similar ideas and after ten minutes they were ahead. An early attack brought them to Connacht’s 22 and Peter Horne and Stuart Hogg showed composure to put the ball through the hands and release Tommy Seymour on the left hand touchline who finished.

The exposed stadium on the Irish west coast is famed for it’s difficult conditions and today was no different with the wind making kicking a challenge, but Henry Pyrgos overcame that to extend the lead with a penalty from in front of the posts.

Lewis Wynne made his GUINNESS PRO12 debut earlier than expected as a blood replacement for Ryan Wilson and his first involvement of top level rugby was to help Jonny Gray disrupt a Connacht line-out.

Wilson returned after being patched up but was off again shortly after, this time after being shown yellow for a late hit on Jack Carty.

The home side quickly made the man advantage count as Niyi Adeolokum finished off some nice handling to dive over in the corner just after the half hour mark.

Just as it looked like momentum was swinging the way of the Irish province, Seymour had his second. Patient build-up play created space and the Scotland international stepped, dived and rolled through Connacht's defence meaning that the Warriors went in to the break leading 13-5.

Despite a strong wind blowing in their face at the start of the second-half Glasgow were on the scoreboard again almost immediately.

A move straight off the training ground was executed to perfection and it was Stuart Hogg who showed strength and pace to exploit a gap to get in on the scoring.

On 50 minutes Gregor Townsend replaced the entire front-row meaning Corey Flynn made his competitive debut and Ryan Grant reached 100 caps in the PRO12.

From then on it was all Glasgow. Sam Johnson, Leonardo Sarto, Seymour and Hogg exploited gaps in the Connacht defence using nice offloading to bring an attack to the hosts' line, leaving it to Tim Swinson to dot the ball down from one metre out to secure the bonus point.

Try number five came once again as a result of electric running from Glasgow’s energised back-line. This time it was prop Sila Puafisi who finished from close range after Hogg was brought down one metre short.

Hogg was replaced by Sean Lamont who became the latest Warriors’ centurion and it wasn’t long before he celebrated the occasion with a try, crossing from close range to complete the scoring in the process, condemning last season’s semi-final defeat a distant memory.