Glasgow Warriors produced a scintillating attacking performance as they christened the new synthetic surface at Scotstoun with a 33-25 win over Leinster. 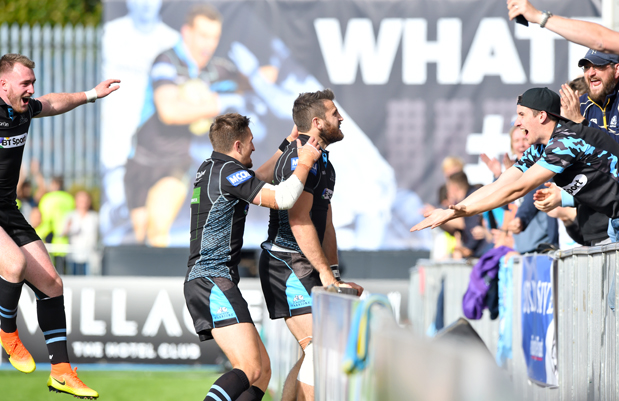 In a man-of-the-match performance, Tommy Seymour scored four of Glasgow’s five tries, with Tim Swinson also crossing the line for Gregor Townsend’s side in front of a sell-out 7251 crowd.

With Olympic silver medallist Mark Bennett having presented the match ball prior to kick-off, it was the visitors who got proceedings underway on the new Scotstoun pitch in the September sunshine.

After an evenly-matched start, Warriors co-captain Henry Pyrgos had the opportunity to notch the first points of the afternoon with a penalty after six minutes, but pushed his attempt wide from 40 metres out.

Instead, the honour of scoring the first points on the new artificial pitch went to Tommy Seymour. After a grubber kick down the side-line from Pyrgos was regathered by the scrum-half in the Leinster 22, the ball was shipped wide to Seymour, who sprinted in for the first try of the afternoon. Pyrgos was unable to add the conversion from out wide, meaning Glasgow led 5-0 after 15 minutes.

Leinster responded with a prolonged spell of pressure in the Warriors half, with only a Leonardo Sarto turnover close to the line halting the Irish side’s attack.

The visitors were not to be denied however, with Rob Kearney touching down in the corner despite the attentions of the Warriors defence. Joey Carbery added the extras to give his side the lead with 26 minutes played.

To the delight of the Warrior Nation, however, Gregor Townsend’s men responded almost immediately. After reclaiming the kick-off, the Warriors strung together a series of phases in the Leinster 22 before Tim Swinson crashed over under the posts for his second try in as many matches. With Pyrgos adding the simplest of conversions, Glasgow were back in front by 12-7.

Once more, though, Leinster piled on the pressure in the Glasgow 22. Whilst the Warriors defensive line held firm, they were dealt a blow on 35 minutes when referee John Lacey sent Sarto to the sin bin for a professional foul close to the try-line.

The Irish side took advantage of the extra man straight away. Josh van der Flier burst through the middle of a ruck 20 metres out, outpacing the Glasgow cover defence to score. Carbery’s conversion gave Leinster a 14-12 lead with just three minutes to go until the half-time break.

There was more to come for the visitors before the interval. A pinpoint cross-field kick from Carbery allowed South African winger Zane Kirchner to gather and touch down for Leinster’s third try. With the last kick of the first-half, Carbery was just short with the conversion, leaving the score at 19-12 to the Irish side at half-time. 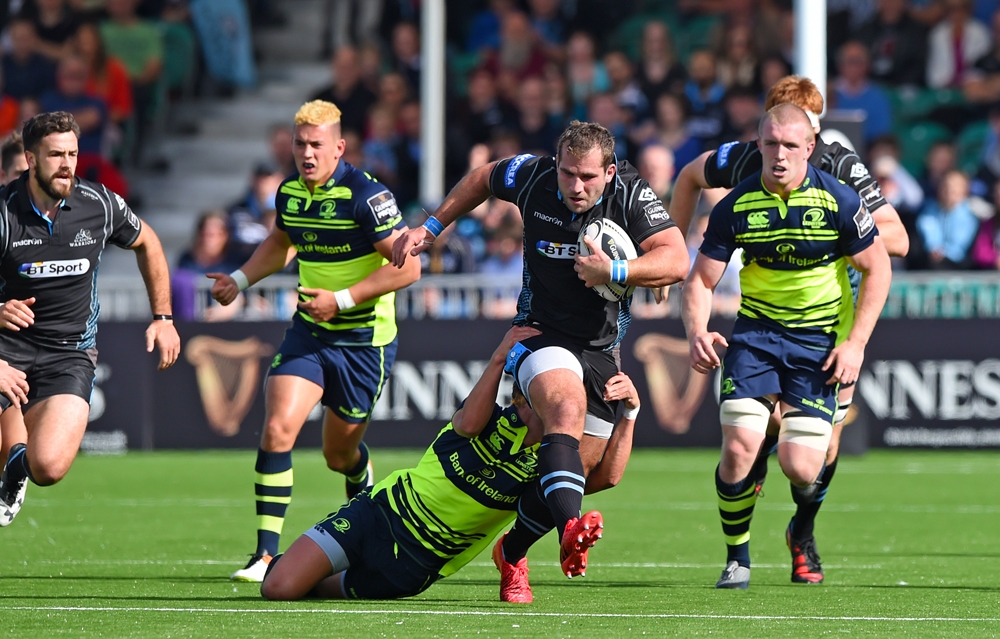 Carbery atoned for his missed conversion by extending his side’s lead with the first points of the second-half, slotting a penalty to take the score to 22-12 in Leinster’s favour.

However, it was Glasgow that registered the first try of the second-half, as Seymour read a Leinster set move perfectly to intercept the ball and run in for his second score of the game. Pyrgos’ conversion narrowed the gap to just three points with 53 minutes played.

Just a minute later, the home side were ahead. A crunching tackle in midfield from Fraser Brown saw the ball find its way to Seymour. From fully 40 metres, the winger found a gap and had too much speed for the Leinster defence, completing his hat-trick and taking his tally for the season to five in just two games. With Pyrgos making no mistake with the extras, Glasgow led 26-22.

Once again, though, Leinster responded. Carbery rewarded his side for a prolonged period of pressure with a penalty, closing the gap to just a point with an hour played.

The home side were finishing the game the stronger, however, and once again it was Seymour who provided the clinical edge. After opting for the scrum having been awarded a penalty, a short pass allowed Seymour to race over for his fourth of the afternoon. Pyrgos added the conversion and the Warriors had a 33-25 lead with just six minutes to go.

It was an advantage they would not relinquish, as, roared on by a vocal Warrior Nation, Glasgow ensured that they made it two wins from two matches as they continue their strong start to the 2016/17 GUINNESS PRO12 campaign.