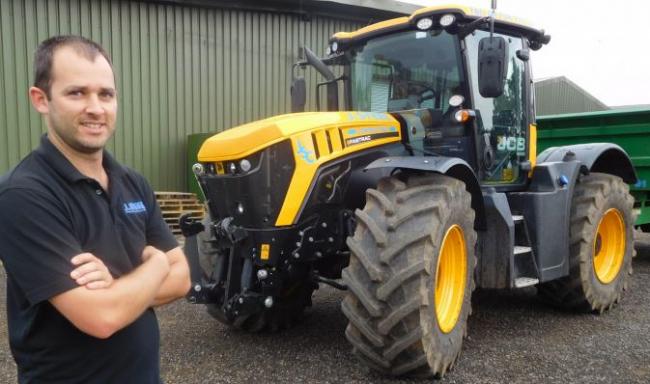 AGRICULTURAL contractor, Jason Steel, has surely one of the most unusual arguments for running a JCB Fastrac. The floor of the new CommandPlus cab is big enough and clear enough, he points out, that he can get some sleep when he’s out on snow ploughing contracts.

“People sometimes notice the sleeping bag strapped inside the cab and ask what it’s for,” said Jason.

“When I’m away from home clearing snow late into the night it’s better to get a few hours’ sleep in the cab than to try getting home. The cab floor has just enough clear space to do that.”

There are also more conventional reasons for running the 235hp tractor on his varied contracting services he runs from the family farm at Falkirk.

He specialises in the equine market, constructing arenas and maintaining fields and paddocks with an assortment of implements.

He also runs the Fastrac with a new Stewart trailer drawing grass for silage and an on-farm digester near Glasgow, before turning his hand to ploughing come the autumn.

“The new 4000 series Fastrac is versatile. It handles field work and road work with equal ability and has advantages over conventional tractors in both situations,” added Jason.

“It’s ideal for a one-man contractor like myself.” With Jason’s father, George, having run a succession of Fastracs and other JCB equipment over the years, it was inevitable that a 4220 would be given a work-out as a potential replacement for a 2013 Fastrac 2170.

“I’d never liked the idea of a CVT transmission because I thought it sapped too much power,” pointed out Jason. “

But having tried one, I’d never go back to a conventional mechanical drive because it’s so smooth and easy to use and you can do so much with the different operating modes.”

The tractor’s field performance came as another positive surprise. In the past, he’d always use the 2170 for road work but a conventional tractor in the field. Not now.

“I did some ploughing with Scot JCB’s demo unit and couldn’t believe how good it was for traction as well as for comfort,” Jason said.

“The bigger wheels and tyres help, of course, but the selflevelling suspension seems to transfer weight to the tyres in a way that gives them tremendous grip.

“I’ve seen the same thing with my own tractor working a five-furrow mounted plough and also on trailer work when I’ve had the 4220 pulling a full load up banks where conventional tractors have had to take a half load,” he added.

Manoeuvrability is another big attraction thanks to the selectable four-wheel steering.

“I can turn off a narrow lane into a gateway in one go in places where other tractors have to shunt round in two,” he said.

“And when I’m drawing silage, the tractor can swing straight round and back in again at the end of each pass instead of having to do a three-point turn, so the forage harvester’s not delayed at all.

Apart from automatically switching to two-wheel steer above 20kph, with the rear axle steering securely locked, the system can be programmed to turn the rear wheels after an adjustable delay based on the angle of the front wheels.

This provides predictable steering response when ploughing or working in tramlines and row crops, with extra manoeuvrability for headland turns.

Crab steer is also available – which is handy for shifting uphill a touch when working across a slope and for KEEPING UP with the forager – Jason Steel’s JCB Fastrac 4220 JASON STEEL with his Fastrac 4220 THE CAB on Jason Steel’s Fastrac also doubles up as a sleeping place for late night working clearing material from a wall when using the Fastrac with the loader.

Another key feature is the suspension – load-reactive at the front as well as the rear – and twin calliper four-wheel disc brakes with ABS for added road safety.

“That’s a really important feature for people like us who do a lot of road travel with these tractors,” added George Steel, who has clearly passed on his enthusiasm for keeping equipment well-presented and wellmaintained.

While Scot JCB’s Edinburgh branch provides effective support if there are any issues, routine servicing is handled in-house. The tractor gets a wash at the end of each week and the cab is swept and dusted regularly.

“I spend more time in that cab than in my house, so I like to keep it clean and tidy,” said Jason.