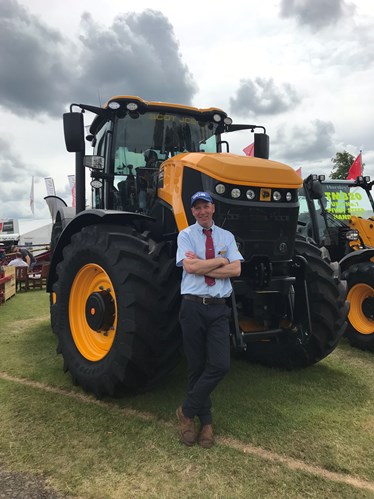 Calum Stirling is a new(ish) face at our Muir of Ord depot. Since starting work as an Agricultural Sales Engineer with the Scot JCB Group in February this year Calum has settled into his new role selling new and used machinery, demonstrating machines and attending local trade shows.

Calum has a massive amount of previous experience in sales and in the workshop as both a mechanic and a foreman.  He currently covers Morayshire, Inverness-shire, the Western Isles, Strathspey and the Highlands selling machinery from JCB, Kubota, Horsch, Ktwo, Portequip and Fleming. Our Muir of Ord depot also incorporates A.M. Phillip Agritech.

Growing up on a family farm meant Calum was driving tractors before he was walking and his passion for agriculture began at a young age.  He even moved to Australia for twelve months to work for an Agricultural Machinery Dealer out there.

When asked why he wanted to work for Scot JCB Calum said “The company has a great reputation and I have experience with all of the products they sell. I also know the service offered from the Engineers and Parts departments is second to none.”

In his spare time, he enjoys swimming, spending time with his partner and two children and he still helps out on the family farm when he has time!

Thanks for your time Calum! We wish you all the best in your role.