1973 was an important year in world events – the first portable mobile phone was invented, Carly Simon’s You’re So Vain was released, and the Sydney Opera House was opened. But at Scot JCB, 1973 was a special year as it saw John “Heppie” Hepburn join the business. This year marks 50 years of continuous service to the business, an amazing achievement that has seen Heppie become a much-loved character in our Glasgow workshop. Having worked with hundreds of colleagues over the years, he has been a constant in the development of Scot JCB. We caught up with Heppie to chat about his time at the business, the changes he has seen, and memories to reflect on. 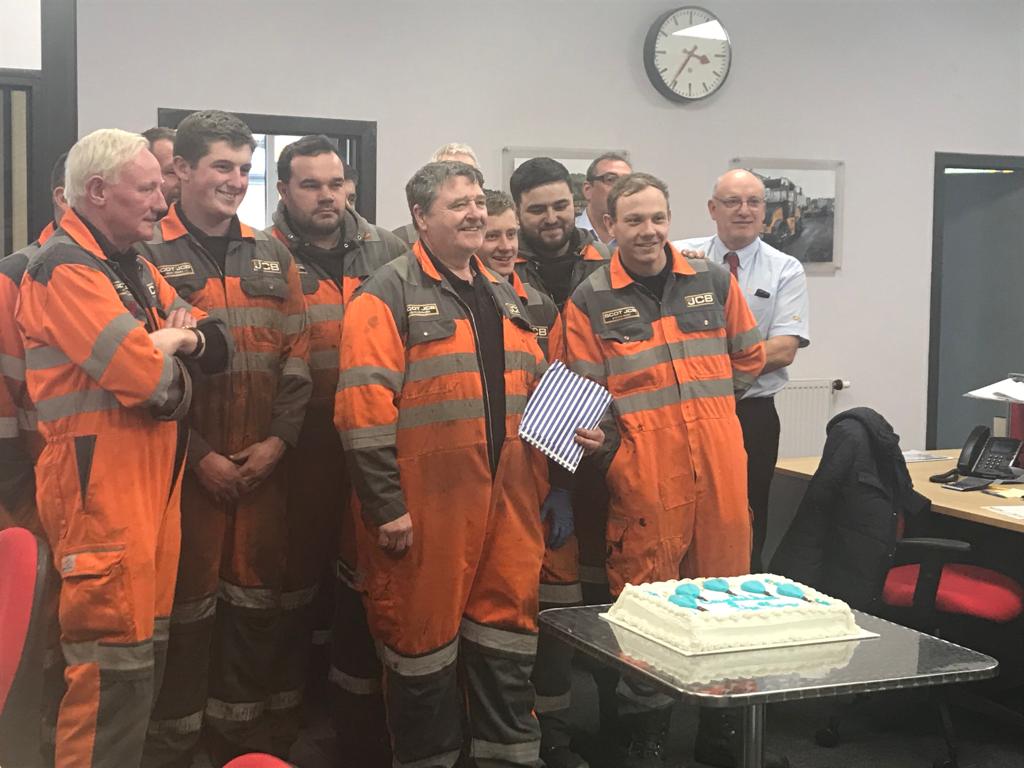 Heppie as he celebrates with some of the Glasgow Service Staff.

Heppie joined as an Apprentice Service Engineer in Glasgow and has worked as a Service Engineer ever since. He described the early days as “very different times”, as serving his time as an apprentice “if you did something wrong, you’d know all about it!”. Reflecting on the machinery when first joining the business, Heppie explained how simple the machinery was to use back then, “You just pulled a lever to rev it up and pulled another cable to stop it”.  Although it wasn’t always serious work, those who know Heppie understand how much he enjoys a laugh, “there was a lot of carrying on in the early days.”

Having seen many changes in the industry, Heppie explained how both technology and training have advanced since he joined the business, especially within the last 20 years. “We’ve started to get much more apprentices come in which has helped the business grow. The way they’re trained has improved, they’re trained better here and when they go to college. The industry has advanced in technology, and the way we learn needs to keep pace with these changes.” Drawing on the fact most advanced machines are computer run, which he said helps to keep the role fresh.

Since beginning as an Apprentice Service Engineer, Heppie’s role has changed throughout the years. After years of service, he finds himself spending his time in the Glasgow depot instead of out on site, though reflected on the advantages of both. “I used to be out in the van all the time, but then I had replacements completed on both my knees which meant I spend my time in the workshop. You get to see a different side to everyone, especially the young apprentices coming through, you get to see them mature and grow every day and week.” Heppie says he’s here to help with his experience and “keep the young guys in check”.

Watching the apprentices progress and develop has been important throughout his time at Scot JCB, especially seeing those come through and work up in the business. “In Glasgow, seeing through now since I’ve been here, Ian Stewart (Service Supervisor), Bryan Davis (Service Supervisor), Angus Erskine (Training & Technical Support) to name but a few, it’s been great to watch them come in and get an opportunity to rise in the business.” While also reflecting on good times shared with former colleagues such as Frank Begley and Alex Stewart among many more.

One of Heppie's many hairstyles

Heppie also took the time to recognise our Chairman, Steve Bryant, for how he has managed and developed the company over the years, “It’s great to still be here with Steve too, and the opportunities he has given the guys to improve during his time. It’s amazing to see his family growing up and running the business successfully, it’s a personal touch that keeps guys like me attached to the business even as it changes.”

In 50 years, challenges will present themselves, and as technology faces change, we asked how Heppie how he worked through these. “When you go through life every part has challenges, you learn and keep going. It’s all you can do.” But did have some advice for new staff joining, saying that you should always take notes when you are working, as there can be a lot to learn, keeping you prepared for next time.

Speaking about what kept him here at Scot JCB for so long, Heppie said “Working on the machines and seeing the technology change has kept the job interesting. I’ve always enjoyed my time here; I’ve never wanted to go anywhere else.” When asked how he felt about the last 50 years, he said “I feel the same as normal, It’s the only thing I’ve known since I left school!”

There are many things we could say to summarise Heppie. 50 years of service is an enormous achievement, but he summarises his time at Scot JCB best. We asked him about his proudest achievement at Scot JCB, and he simply replied, “Being able to go home every night and knowing you’ve worked as hard as you can, time and time again, that’s the achievement right there.”

Chairman of Scot JCB Group, Steve Bryant, said “From the moment I interviewed him 50 years ago I knew Heppie was the best man to join us. I was right! He’s a great character and when he decides to leave us, he will be sorely missed.”